EXISTS IN THE FLORIDA COURTROOMS

A conglomerate of civil rights organizations recently concluded that blatant unchecked corruption within the courtrooms of Al Capone’s old hangout has become epidemic. Reports are surfacing of gross judicial misconduct and unethical behavior of judges in Florida’s 20th Circuit Court in Fort Myers. They claim that the activities have been unchecked for sometime with little or no media coverage and no one is speaking out. They Claim that many of the judges sitting on the benches in this City of the Palms are run by and controlled by the large attorney firms operating within Lee County. Complaints of impropriety are adversely “covered up” by a Judicial Commission that appears to be bent on protecting their fellow jurists to a point where they actually look the other way or nix complaints being alleged against any of their peers. So say members of United for Justice, Extend a Hand For Justice, and The Citizens for Check and Balance, who have recently banded together in speaking out. It’s ironic that Capone used to reign there during the winter months, and had a lot of clout in the courts. Well, he’s gone now, so members of the groups want to know who is now pulling the strings, and why justice is no longer available in the courtrooms.

Take for example a recent disclosure that arose out of an unlawful SLAPP lawsuit filed in the local court by the City of Cape Coral against a small Religious Community, The Nelsen Residence Inc., who was operating a small senior and disability complex called the Haven of Divine Love. After false claims of what they perceived as an abusive, overzealous, and aggressive Code Inspector, Marilyn Buck, who admitted that she was not knowledgeable about construction, that a stairway of their private residence was “unsafe,” Nelsen fought back with a slew of protest letters objecting and challenging the wrongful allegations, sending copies to every City Council members, managers and legal staff. The City became outraged and proceeded to engage in a slew of abusive and deceptive practices. How dare someone challenge the authority of the City? was their apparent mentality. The City initiate further attacks, sending out a building inspector, Keith Eric Liebegott and Fire Chief John Maher, who collectively, under the false pretense that Nelsen’s private residence was a commercial building, initiated a slew of false and wrongful allegations. Nelsen again fought back with another slew of objections letters of protest. The City became more outraged and vindictively turned off the electricity to the building in a blatant attempt to force Nelsen into submission. Nelsen stood their ground, posting a large banner, “Heck No! We Won’t Go!” on their building. The City reacted, and shut off the water, affectively condemning the building including Nelsen’s private Chapel and disrupted Nelsen’s religious practice. Hanging a new banner on the building stating, “GOD’S HOUSE HAS BEEN CONDEMNED BY THE CITY OF CAPE CORAL FLORIDA” was the last straw leading to the filing of the SLAPP litigation. Nelsen again reacted and DECLARES WAR ON THE CITY OF CAPE CORAL FL

THE FACTS, INFORMATION, DOCUMENTATION, AND EVIDENCE IN THIS MATTER IS SO VOLUMINOUS THAT IT IS IMPOSSIBLE TO WRITE ABOUT IT ALL IN THIS SHORT ARTICLE. HOWEVER, I WOULD HIGHLY RECOMMEND, IF YOU WISH TO VERIFY WHAT I WRITE, CHECK OUT THE WEB PAGES

Nelsen again fought back and filed a cross complaint for the numerous civil right violations of The Religious Freedom and Restoration Act, and countless Constitutional violations implemented by the City. Enters attorney Robert Shearman and the law firm of Henderson Franklin Starnes & Holt, the largest locally based legal firm with their 180 attorneys. The new “Al Capone” of the area. Their job was to squash Nelsen and financially cripple them, a feat easily done by initiating continuous and constant Petitions and Motions, and the deliberate hampering of discovery and process, not to mention the intentional attempt to discredit Nelsen’s religious practice. Attorney Shearman appears on local NBC 2 TV, in collusion with their reporters, Bryan Anderson and Annie Hubbell, stating that "They're trying to wrap themselves in a cloak of protection for religion," said Bob Shearman, attorney representing the city in the case, effectively tainting any future jury pool and discrediting Nelsen in the Court. Notices to the Court, and Judge John E. Duryea Jr., a reputed past associate of Henderson Law Firm, are ignored, and subsequently Duryea issued an adverse ruling in favor of the City and against Nelsen. Objections and complaints are filed, including a complaint with the Florida Judicial Qualifications Commission. Duryea disqualifies and rescues himself. Enters Judge Alane Laboda, a past partner in the Henderson Law Firm. Laboda appoints Judge Jay B. Rosman, another past associate of the Henderson Law Firm, who subsequently dismisses the Civil Rights claims of Nelsen against the City. No trial, no hearing, and adequately denies the ability of Nelsen to properly present their documentation and evidence and present their dispute. “A slam dunk case riddled with gross judicial misconduct in the first degree,” says John Wells, President of California based Extend a Hand For Justice. “A Church is condemned and religious practice is interfered with, an unheard of thing in the United States of America, and nobody, including the judges overseeing the claims, does anything about that. Unbelievable. You couldn’t find a better example of collusion between the court and the law firm,” stated Marc Evan, the Executive Director of another California based advocate known as United For Justice. “We don’t have this type of situation here in California because we have groups that watch what is going on in our courtrooms,” stated Jay Phelps of Oakland California based Citizens for Check and Balance. All 3 groups can’t believe what is going on in the Florida Courts and don’t understand why there is no watch groups in Fort Myers questioning the illicit activities.

This reporter could not find any listings for any advocacy groups or civil right organizations in the southwest Florida area. It also appears that the local media, News-Press, Cape Coral Breeze, NBC, CBS, ABC, and FOX have dropped the ball in being the government’s watchdogs. “It’s sad,” said Wells, “the citizens of south Florida are being denied true justice in their courts by unscrupulous and unethical judges who are more concerned about appeasing prior associates than maintaining the integrity of the court. Many judges today, especially in the 20th Circuit in Florida, forget that they are bound by constitutional requirements and cannot contain the appearance of influence or impropriety. Our Organizations are going to attempt to disclose to the people of Florida what is going on in hopes of correcting the misconduct and deception that currently exist, even if the local media continues to be silent”

According to the Florida Code of Judicial Conduct, “A judge is an arbiter of facts and law for the resolution of disputes and a highly visible symbol of government under the rule of law.” It is this requirement that the organizations are most concerned about. They all claim that this is not being performed as required, and they claim they will do whatever is necessary to force the judges of the 20th Circuit Court in Fort Myers Florida to abide by his important rule, or they will seek the removal of those judges that don’t comply. 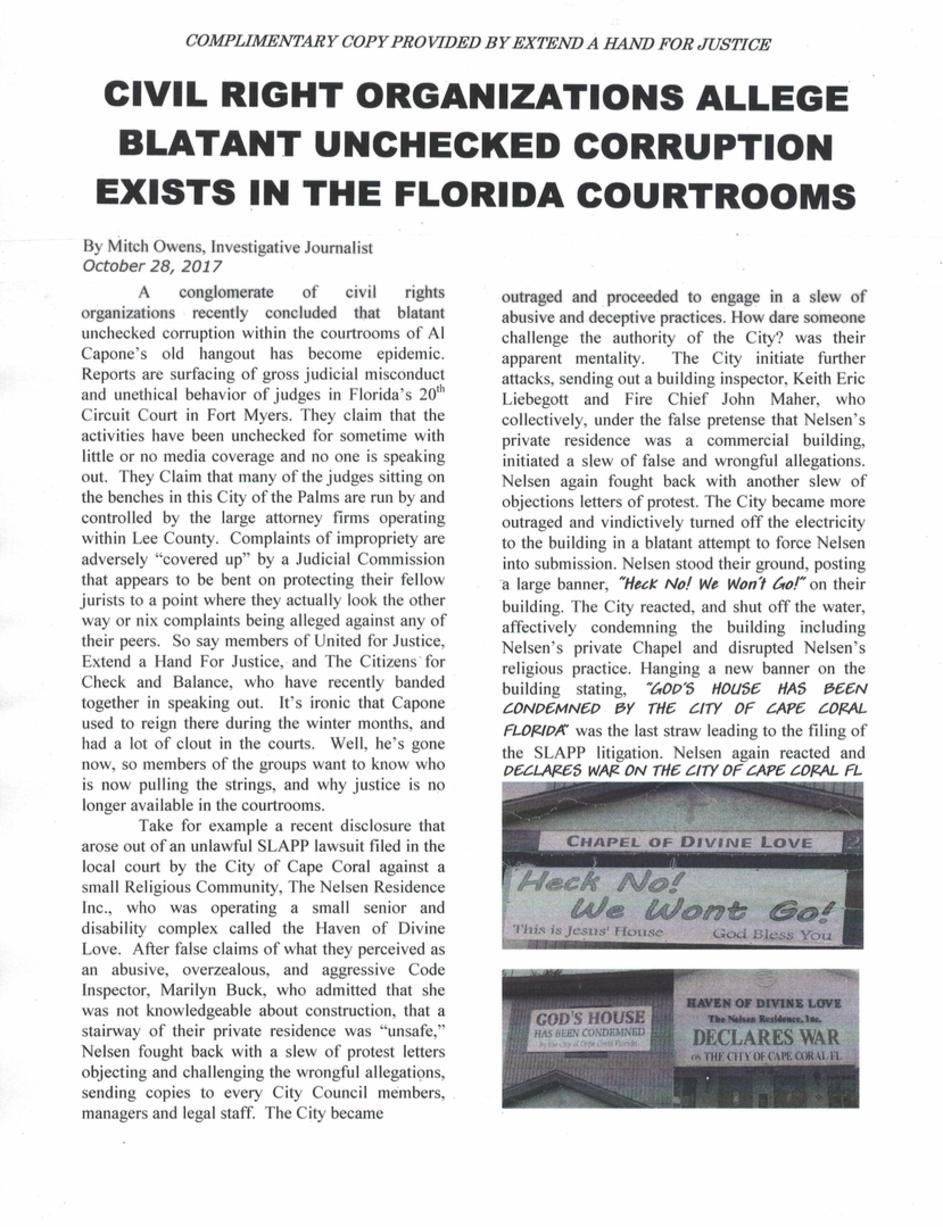 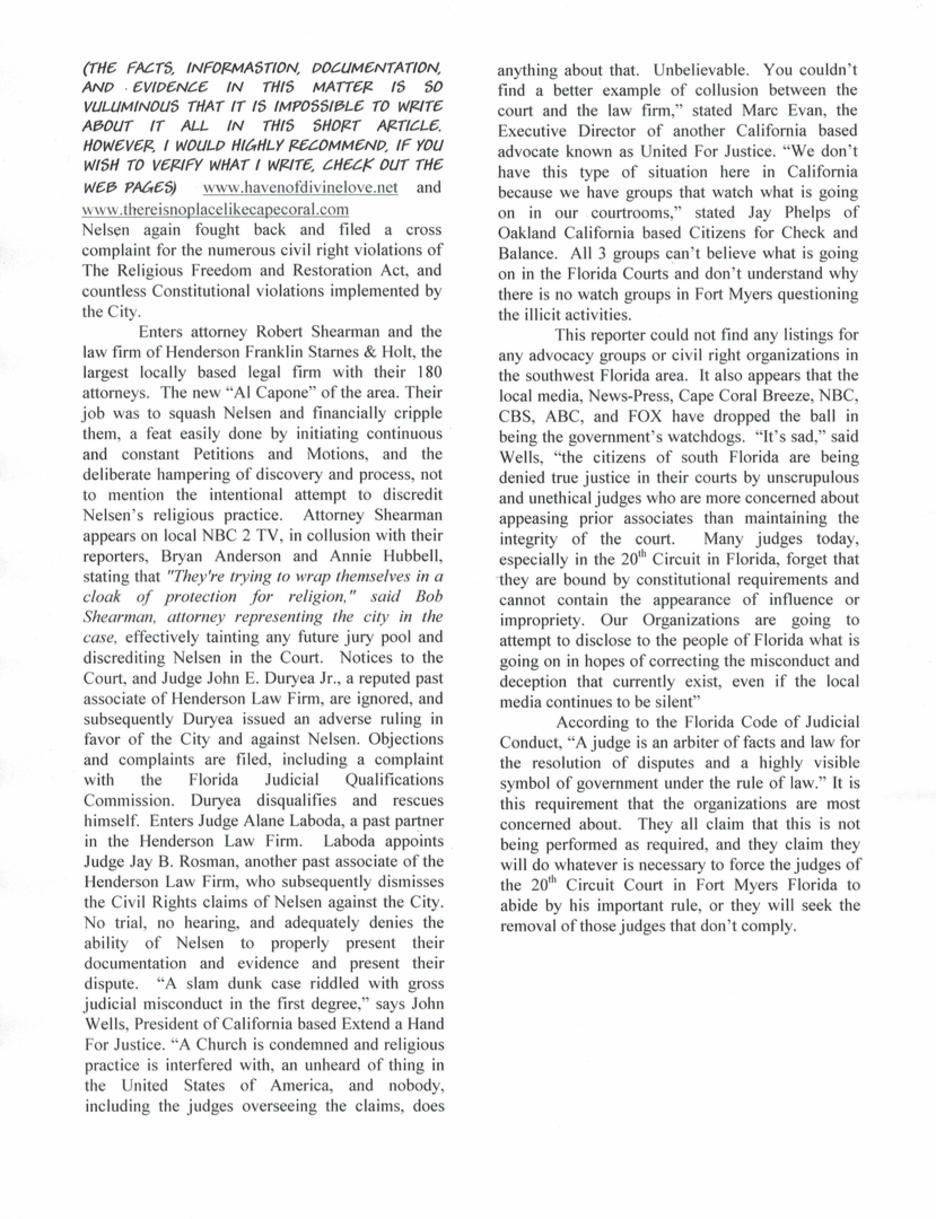