A California Civil Rights Organization, Extend a Hand For Justice, has filed a formal complaint with the Florida Judicial Qualifications Commission alleging “Gross Judicial Deception and Gross Misconduct which defies and violates the public trust” against three Florida judges and seeks their removal from the bench. The complaint, filed in August 2017, was made against Judges John E. Duryea Jr.; Alane Laboda; and Jay B. Rosman of the 20th Judicial Circuit Court in Fort Myers, Florida. The complaint further alleges overall conspiracy and collusion between the judges and the local law firm, Henderson, Franklin, Starnes & Holt, P.A. The complaint pertains to activities surrounding court cases between The City of Cape Coral and The Nelsen Residence Inc., a Lee County Religious Community that has challenged improper conduct by city personnel. The City, represented by Attorneys Robert Shearman, Richard Aiken & Tracie McKee with the Henderson Law Firm, apparently has a direct contact with Judge Laboda, who was a prior partner in the Firm. It was also alleged that the Henderson Law Firm participated in both Judges Duryea’s and Rosman’s prior elections, and was instrumental in the election of Laboda.

Extend a Hand is no stranger to filing complaints with Judicial Commissions in numerous parts of the country. Last April, Extend a Hand filed a complaint with the same Commission against Judge Duryea for his unusual findings in favor of a Motion for Summary Judgment filed by the Henderson Attorneys. When a valid protest was made for the collusion and improper ruling, Judge Duryea disqualified himself. Judge Laboda, acting as the Administrative Civil Judge, assigned the cases to Judge Rosman. In May 2017, Extend a Hand filed another complaint with the Commission, notifying them that the majority of the Judges sitting on the 20th Circuit Court, intentionally omitting biographical information of prior education, experience, and the associations of law firms they worked for. Apparent hearings or investigations by a “secret” Investigative Panel of the Commission, declined to take any action of the complaints. After numerous Freedom of Information requests for the names of the “secret” Investigative Panel, the Commission refused to disclose the names. “It used to be that many ‘Mafia Godfathers’ would brag about how many judges they held in their pocket. Now, it's the large attorney firms who brag and now control what goes on in the courtrooms of America." said John Wells, President of Extend a Hand. "Because most local judgeships are ultimately non-contested, it's easy for a large firm to hand pick one of their attorneys or partners to run for the open judge positions. Once in, the ex-employee or ex-partner of the law firm, now a judge, can easily rule on the firm’s cases before him/her. It’s a slam-dunk situation often giving un-ethical rulings in favor of the ex-partner’s firm.” The Judge page on the web site for the 20th Circuit Court of Fort Myers, http://www.ca.cjis20.org/home/lee/leejudges.asp did in fact show that the majority of the sitting judges had no biographical information posted as to who they are, what their education and experience was, or who they were affiliated with prior to becoming judges. “There is no proper check and balance of the judiciary of the 20th Circuit,” stated Wells. “The can do whatever they wish, and the Judicial Qualifications Commission will not investigate the wrongdoings that exist, or disclose who is actually nixing the allegations. For all I know, the ‘secret’ Panel could be the actual judges being complained about”

“When an injured party, or a person who challenges improper behavior of a government entity, is subjected to unfavorable treatment by a discriminatory or colluding judge, it defies the ability to obtain justice,” says Marc Evans, the Executive Director of United for Justice, another California Civil Rights Organization. "Using favoritism in the courtroom, as indicated by the substantial documents and evidence in this situation, only undermines the integrity of our courts. On top of that, when a Judicial Commission fails to properly oversee judicial misconduct, it destroys the trust of the public at large” Evans added.

The case filed in the 20th Circuit Court of Lee County pertained to gross violations by the City of Cape Coral of the Religious Freedom and Restoration Act and a previous filing of a Strategic Lawsuits Against Public Participation, (SLAPP)***, by the City against The Nelsen Residence Inc., a local Religious Community that provides low cost housing for indigent parties. Nelsen, doing business as The Haven of Divine Love, was originally a convent for nuns, but now operates as a Religious Community of both male and female members. After hanging a “Heck No!, We won’t Go” banner on their Chapel and making a formal “Declaration of War” against the City in response to the City’s “anti-poor” policies and procedures, The City in retaliation, turned off the Community’s electricity and water effectively condemning their house of worship. “To be denied Due Process of Law and the ability to pursue our claims by local Judges is in fact a travesty of injustice, and a mockery of the court system,” says Jerome Valenta, The Nelsen’s President and Chairman of The Board. “We’ve been, pardon my pun, SLAPPED into submission by a very unethical group of Judges”

Although the complaint with the Judicial Commission and subsequent appeals in the Appellate Court are still pending, it appears that the real losers in this instance are the disadvantaged and low income residents of Cape Coral who have suffered from their actions.

(SLAPP)*** Strategic Lawsuits Against Public Participation, although illegal, is sometimes filed by government entities against parties who speak out against abusive conditions in an attempt to curtain or silence them into submission by enacting costly litigation that is so unbearable that the dissenting party has no choice but to give up.

This is just the 1st Page of story.

And for yet more information of corruption and abuse of authority check out the following web page and multi volume book set!

"Yes Marni, There is NO place like Cape Coral" 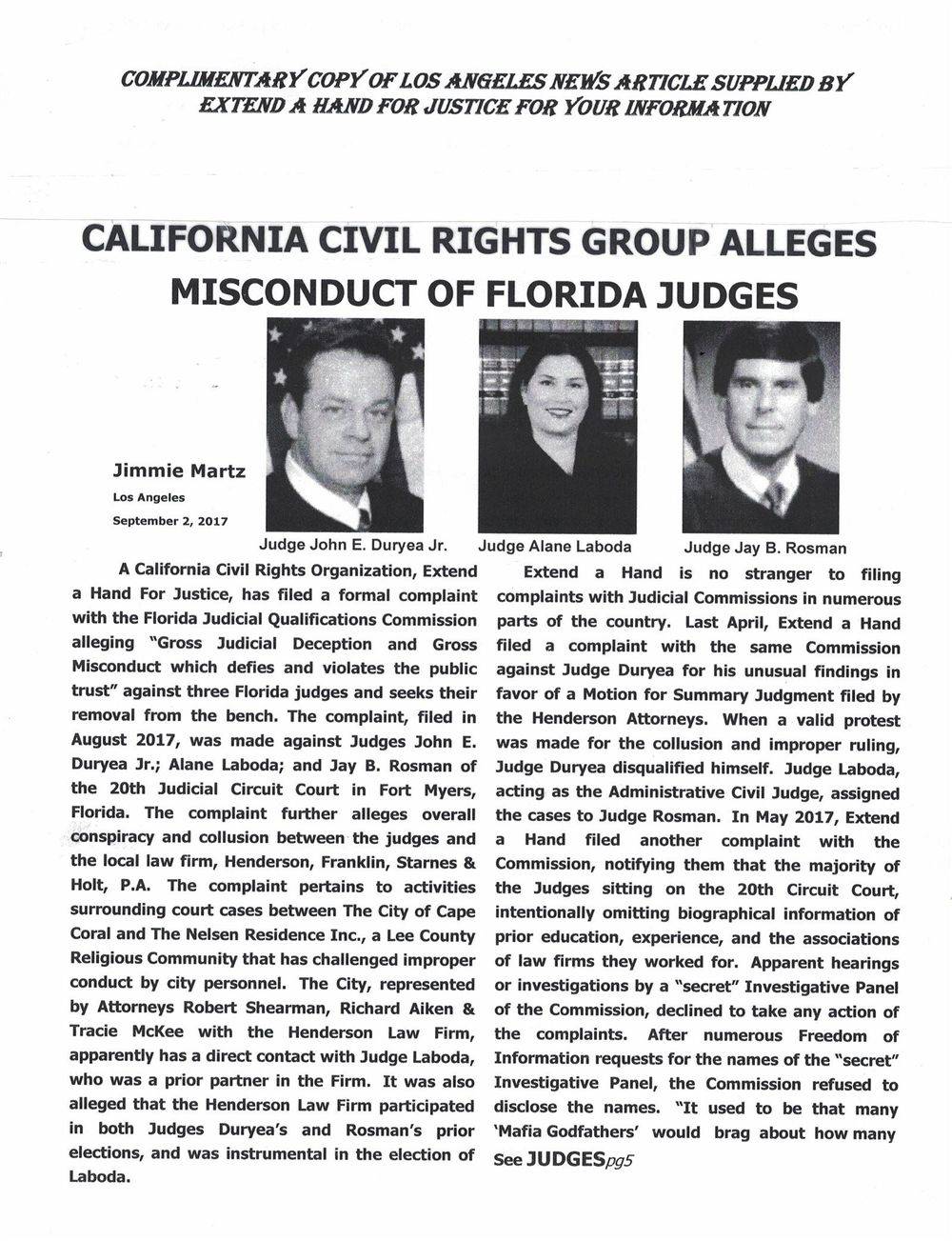