In a unprecedented move, the Florida Judicial Commission ruled that their investigative panel of the Commission had determined that complaints lodged against three Florida Judges for judicial misconduct, judicial deception, intentional violations of due process of law, dishonesty, unethical behavior, deliberate acts of retaliation, and the overall conspiracy and collusion between the Judges were not a breach of the Florida’s Code of Judicial Conduct but were matters for review through normal court process. In a letter by attorney Alexander J. Williams, the Assistant General Counsel of the Commission, sent to a California the civil rights organization, who filed the complaints, stated that “The Investigative Panel of the Commission completed its review of your complaint in the above matter and has determined, at its most recent meeting, that the concerns you have expressed are not allegations involving a breach of the Code of Judicial Conduct warranting further action by the Commission, but are matters for review through the normal court process.”         “Not so,” says John Wells, President of Extend a Hand For Justice, the Bakersfield California advocacy group, “it’s a clear cut case of the ‘Fox Guarding the Chicken Coop.’ If a reviewing Judicial Commission condones the acts as alleged, without a proper investigation, Judges are systematically immune from improper behavior.” The actions didn’t go over very well with other Civil Right Organizations when they heard the news. “What? Said Jason Phelps, a member of Oakland California Citizens for Check and Balance, “That kind of ruling contradicts logic. A ruling such as that could only be for a party to a specific litigation, not a separate outside party. Had the complainant, Extend a Hand For Justice, been a party in a legal court action, and received an adverse ruling by a judge that involved Judicial Misconduct, then their recourse would be to appeal said adverse decision or ruling in an Appellate Court. “It doesn’t really matter who the litigants are or what case it is,” said Wells, “as an outside party who observed the activities, we have sufficient documentation and evidence to corroborate our claims.”

Evidently, according to the records on file*, Extend a Hand filed their complaint against Judges Jay B. Rosman, John E. Duryea Jr, and Alane Laboda of the 20th Circuit Court in Fort Myers, Florida as an independent and separate party to any litigant in the case, and would not have any recourse to have illicit and improper actions of the judges reviewed in any way through the normal court process. According to the Florida Code of Judicial Conduct, “Reports of misconduct by judges must be made to the Judicial Qualifications Commission.” It doesn’t indicate that only litigants in a case can make complaints against judges. The Code further requires that “A Judge Shall Uphold the Integrity and Independence of the Judiciary.” That would pertain to all Florida judges, including the judges of the Judicial Commission and the Investigative Panel.

Unfortunately, due to statutes pertaining to the Commission, the names of the judges of the Investigative Panel can not be disclosed, nor can it be determined how many of the 15 Commissioners made up the Panel, so this author can not ascertain which judges or individuals of the Commission were on the Panel and responsible for the ruling.

“This is absolutely unbelievable,” said Marc Evan, the Executive Director of another concerned civil rights organization, United for Justice. “Who ever heard or could possibly believe that judicial misconduct, judicial deception, intentional violations of due process of law, dishonesty, unethical behavior, deliberate acts of retaliation, and the overall conspiracy and collusion between the Judges are not violations of the Code and unethical in its entirety.” “We filed our objections to their improper ruling” says Wells, “and we can only see what they do before taking further actions. We strongly feel that the Investigative Panel of the Commission is attempting to cover up the illicit actions of the judges involved, and we will not tolerate that.” Wells said that they would give the Commission time to correct and reverse their error, and if not, they are preparing to file formal complaints against both the judges and Commission with the Florida Governor’s Office and the Florida House of Representatives as required.

*Copies of the complaints and letters are posted on Extend a Hand For Justice web page. 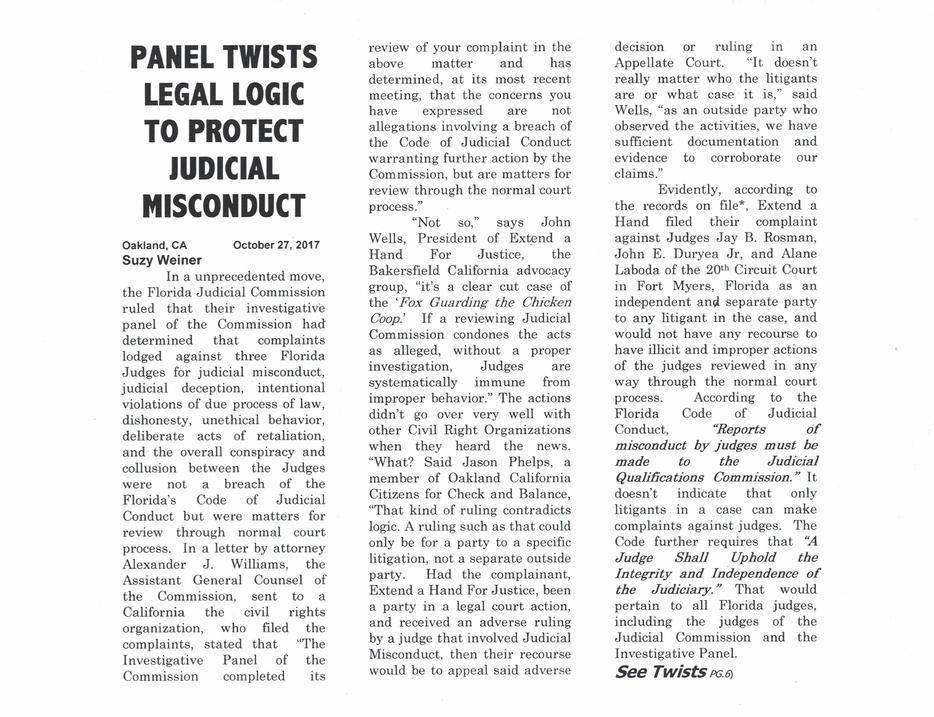 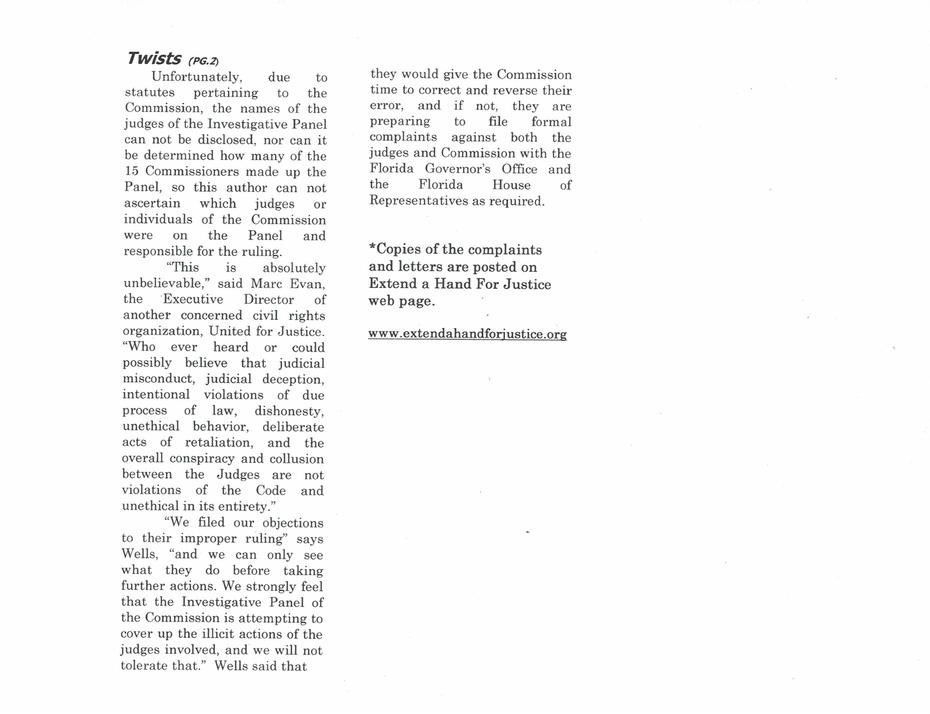