Questions have recently been raised by numerous watchdog civil rights organizations that imply serious improprieties exist within the Florida Judicial Qualifications Commission. The organizations, United For Justice, Extend A Hand For Justice, The Citizens For Check and Balance, Americans United For Justice, and several affiliated groups, who are staunch supporters of social justice and civil rights, are also questioning why there is no proper overseeing of the Judicial Commission by civil right organizations and legislature members in Florida. They say that even the Florida media, especially the media outlets in the Tampa-Fort Myers-Cape Coral area have neglected to be a proper check and balance of the Courts and Commission. Although the above groups primarily operate or are based in California, most of them have continuously addressed issues in Texas, New York, and Florida in the past.

In a joint press release statement, the group claims that their attempts to address many issues of judicial misconduct complained about to the Commission, where thwarted by generic-rubber stamped replies stating that "the Investigative Panel has completed its review (but held no investigation) and have determined that the concerns you have expressed are not allegations involving the breach of the Code of Judicial Conduct warranted further action by the Commission, but are matters for review through the normal court process.” “So, what is the normal court processes for review of judicial misconduct? For the judges to self police their own activities?” says the groups in chorus. “That’s not what the system is set up to do.” “Tell me you properly investigated the allegations and the reasons why you found no violations, not just white-wash and cover them up,” said Mac Evans of United For Justice.

According to their web site, http://floridajqc.com The Judicial Qualifications Commission is an independent Agency created by the Florida Constitution solely to investigate alleged misconduct by Florida state judges. It is not a part of the Florida Supreme Court or the state courts and operates under rules it establishes for itself. “That’s the problem,” says Jay Phelps, spokesman for Oakland based Citizens for Check and Balance, ”they operate under their own rules to suit themselves.” “It appears that the taxpayers of Florida are expending millions of dollars a year to fund a Commission that does not perform the duties they were enacted to do,” Phelps added. “If they don’t properly investigate judicial misconduct and unethical behavior, there is no chance to correct the corruptions in the courtroom.”

Also according to the JQC’s web page, the mandated job of a Judicial Commission is to oversee the operations of all Florida Judges sitting on the Florida benches. Pursuant to Article V, Section 12 of the Constitution of the State of Florida, and the related Code of Judicial Conduct, Shall Uphold the Integrity and Independence of the Judiciary;

The initiating complaints were originally filed when personnel of The City of Cape Coral riddled a Florida Religious Community with countless discriminatory actions in violation of theFlorida Religious Freedom Restoration Act, and filed a Strategic Lawsuits Against Public Participation (SLAPP), they attempted to seek corrections within the local judicial courts, only to find the court to be equally as discriminatory and evasive. Their Chapel was condemned and their religious practice was restricted, and the local courts, specifically Judges John Duryea, Alana Laboda, and Jay Rosman, in collusion with the City’s outside attorney, Robert Shearman of Henderson Franklin Starnes & Holt, quashed the litigations. Extend a Hand For Justice, observing the gross misconduct within the court, filed the original complaint.

When members of the organizations requested who the so called Investigative panel was who made the determination, they were answered that the panel members could not be disclosed to the public. Although the “members page” stated that the following parties, Hon. Kerry I. Evander, CHAIR; Hon. James A. Ruth, VICE-CHAIR; Hon. Steven P. DeLuca; Hon. Krista Marx; Hon. Michelle T. Morley; Hon. Michelle T. Morley; Hon. Robert Morris; John G. (Jay) White, III, Esq.; Eugene K. Pettis, Esq.; Alan B. Bookman, Esq.; Mayanne Downs, Esq.; Mr. Alvin V. Alsobrook; Ms. Shirlee P. Bowne’; Mr. Harry R. Duncanson, CPA; Mr. Ricardo (Rick) Morales, III; Jerome S. Osteryoung, Ph.D., were members, they did not, nor would not, disclose exactly who was on the Investigative or Hearing panels.

“If this is not a clear example of violations of the Judicial Code, nothing is,” stated John Wells, of Extend a Hand. “Something needs to be done and the proper authorities overseeing the Commission are derelict in not doing so. I’m sure that if you take a survey of the citizens of Florida, most would state that they currently have little faith or trust in our judges and courts today,” says Wells. “And that’s a shame.”

The group of organizations claims that they intend to continue exposing this issue until corrections are made and our judicial process is again held to the highest standard of integrity and trust.

is an investigative journalist featured in numerous newspapers

and periodicals and the author of his upcoming book,

“Yes Marni, There Is NO Place Like Cape Coral” 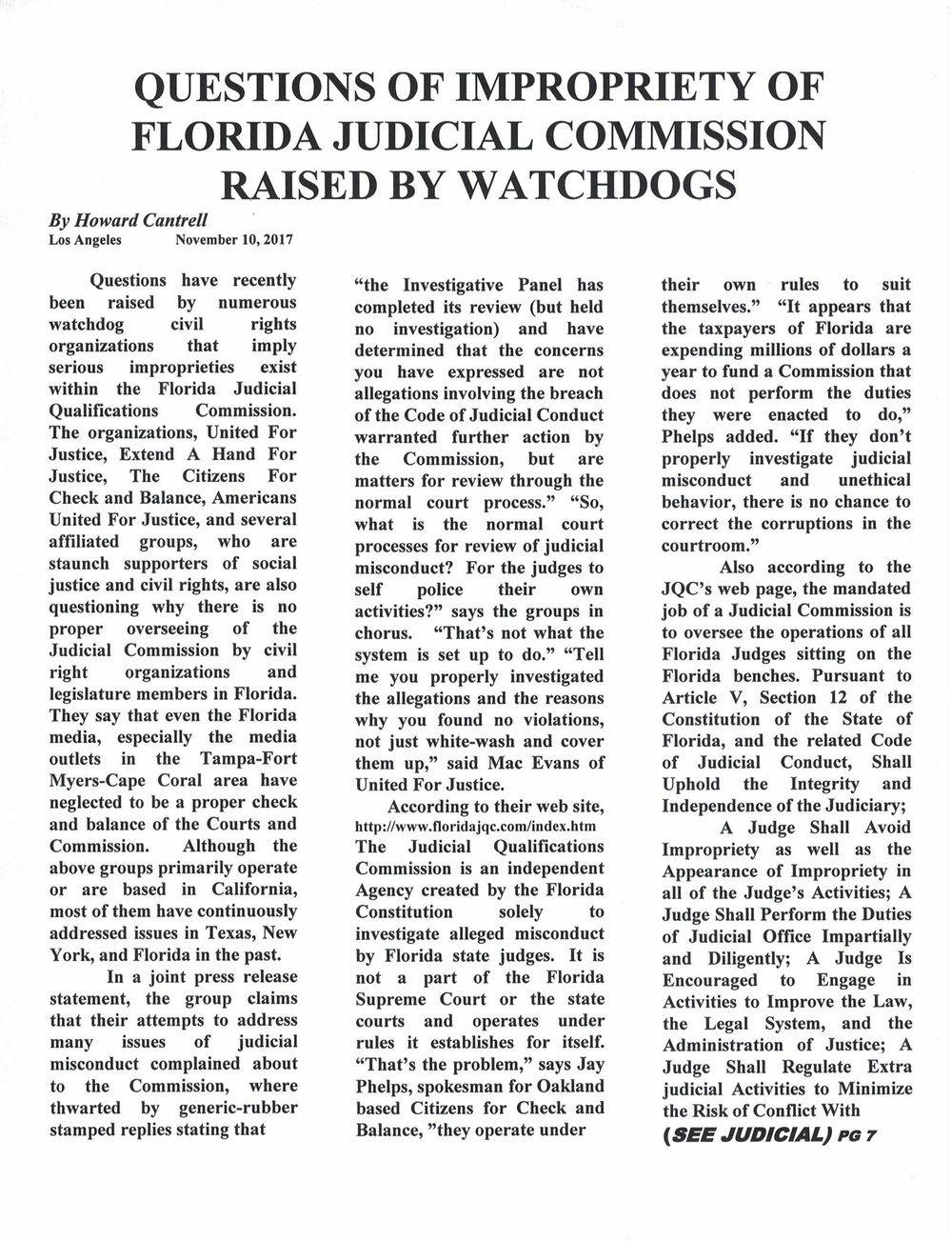 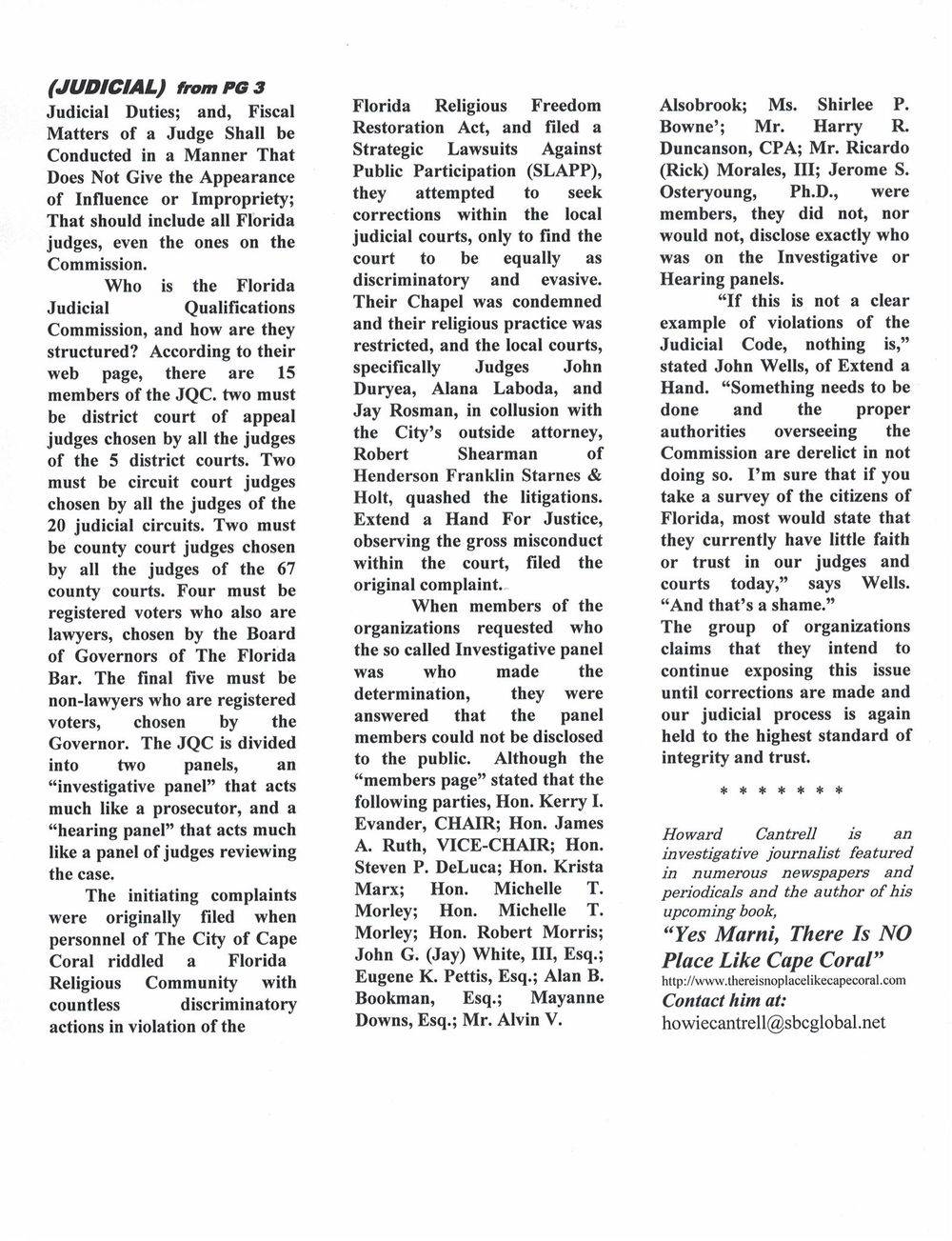